How many jabs do you want?

To say no to horde vaccines:

This site has pointed out that we are some way off having a world parliament (see ‘About Global Democracy’).

Perhaps we need simpler kinds of institutions for global regulation. For example, imagine if this article appeared in tomorrow’s newspaper:

“The Republic of Kiribati has announced that it will, at the 2014 meeting of the General Assembly of the United Nations, sponsor a resolution to create a ‘World Standards Authority’.

The World Standards Authority, if implemented, will oversee a new incentive based process for encouraging countries to improve their performance in the target areas of:

The proposed Authority will be in addition to, and not instead of, any existing institutions.  It will come into operation in 2020.

The Authority will be responsible for administering a fund comprising one percent of the GDP of all countries. The fund will be redistributed to countries at the end of each year, according to their improvement in standards in the target areas.

In practice, countries that have demonstrated a lower than average improvement in their standards in these areas, in a particular year, may receive back from the fund, say, only three quarters of their levy. This means that at the end of the audit period for that year they will, in effect, pay one quarter of their levy – equivalent to a quarter of a percent of their GDP – to the Authority’s fund. But only if they have performed well below the average. On the other hand, a country that is spectacularly successful in addressing the areas covered by the standards may recover from the levy fund an amount greater than the one percent levy imposed on it  –  meaning, they will never pay the levy for that year, and, instead, receive a windfall.  For smaller countries this could, conceivably, add several percent to their GDP.

The fundamental redistribution principle will be: those who have improved most against their own pre-existing standards in the target areas will receive the largest reimbursement of the levy/payment from the fund.  Those who have improved the least against their own pre-existing standards will receive the least. So, it will be the rate of improvement compared to other countries, and not the standards in the target areas, themselves, that will be the touchstone of the scheme.

Funding for the administration costs of the Authority will come from a ‘Tobin tax’ (tax on international financial transactions), commencing in 2017.

The Authority will be overseen by a Leadership Group.  That group will be appointed by the General Assembly, based on proven leadership abilities (ie, a meritocracy/democracy). 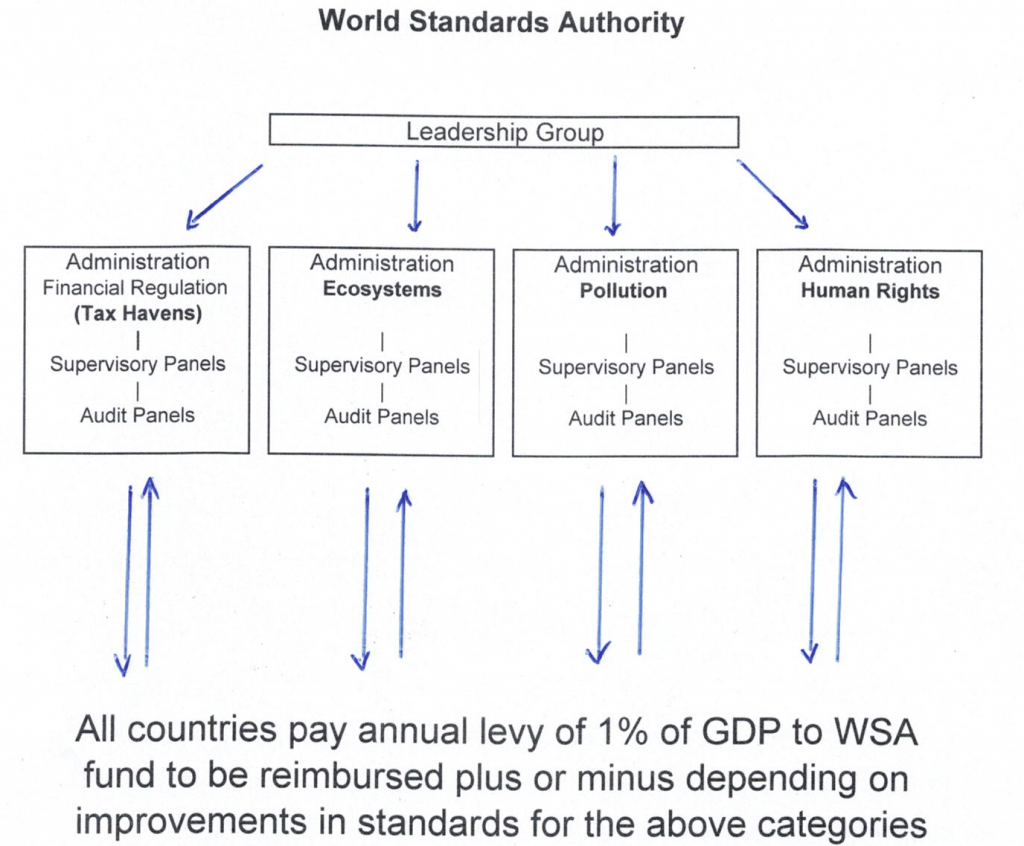 Audits will take place over the 12 month period following each calendar year of the scheme – meaning, if the scheme starts on 1 January 2020, the first levy will be determined on 31 December 2021. Levy notices will be issued to each country shortly after that, and payment (if any required) and redistribution then occurs.

Interest payable on delayed payments could vary according to the financial circumstances (capacity to pay) of any defaulting country. Failure to pay, or participate, will result in UN sanctions.  Allegations of graft or corruption at any level of the process will be investigated, and if proven, will affect the reimbursement level the following year.

As any rigorous measurement protocols would likely result in congestion, delay and appeals that could outweigh the benefits of the scheme, the auditing process will be by diverse and expert audit panels and supervising panels, and without reference to formula. Extenuating circumstances such as natural disasters and alternate national priorities can be taken into account by the panels, but they will also have regard to the efforts of others similarly circumstanced, and the objectives of the scheme.

When asked what he thought of the scheme, the Secretary General said, “There is no harm in putting it to the General Assembly.”.  Asked whether he thought the resolution would be unsupported by wealthy countries, as promoting a redistribution of wealth from ‘already high’ standard countries to ‘historically low’ standard countries, the Secretary General observed: “I do not think so. Under this proposal, one would expect a flow of capital back to major economies from tax haven countries, which themselves will benefit from opting out of their involvement in tax avoidance schemes.  Also, the opportunities for wealthy countries to improve in the target areas, both locally and globally, are limitless. I would expect all countries of optimistic disposition to support it.”

The resolution, if passed by the General Assembly, would be referred to the Security Council, which has the power to make it binding on all member countries.”